Today we had our school athletics day. I really enjoy days like these where I have the opportunity to see some other things that students do outside of the classroom.

For some students, it’s easier to jump an actual hurdle than to jump the mental hurdles of learning an academic subject. It’s really endearing to see these students shine in their athletic events and I enjoy cheering them on in a setting other than the classroom. 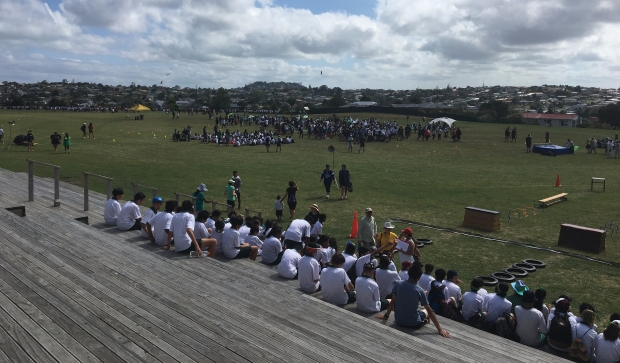 When I first started teaching in New Zealand schools, the only other place I had ever heard of house systems were in Harry Potter books. My family and friends teased me when I started talking about my house class and the fact that they were trying to earn points so they could win the house competition. They wanted to know if my school taught potions class as well as mathematics classes. Har har.

This is one of the only years in my teaching career where I don’t actually have my own house class and to be honest, I kind of miss it. I became really invested in the group of students who I saw every morning for 4 years. It was my job to know where they were headed and keep them on the right track to success in their time at the school.

What is good about my current school is that even though I don’t have a house class of my own, I have been assigned to one of the houses. For athletics, I still felt like I was a part of everything. I got to follow my house group and cheer them on. The students were excited that I was supporting their house.

The only bad thing was that nobody told me what colour my house was (the houses are named after past students who have made significant contributions to sport) so I accidentally wore blue instead of green! I had to explain all day that I had made a mistake! At least I’ll never do it again since I had to explain myself so many times!

Seems kind of anticlimactic to have to end the week with one more day of classes after such a fun day! I have tried to plan some really exciting lessons for tomorrow!

Yesterday we had our first full staff meeting. We talked about some really interesting things (which I will probably end up expanding upon at a later date) however one of the things that stood out for me the most was a TED Talk that was shown.

I had seen this TED Talk before and when it was projected onto the screen, I nearly squealed from excitement. Rita Pierson: Every kid needs a champion is about truly knowing your students and building relationships with students. I love this talk because I follow Rita’s philosophy that if you can build the confidence of your student and make them feel cared about, this is what will help them want to learn. She reminds us that some students don’t have anybody else cheering them on and that’s why it is so important that at least their teacher does.

I have had students who were very difficult to teach but I enjoy finding out what makes them “tick.” There was one Year 9 boy a few years ago in my class who refused to take tests for anyone and so nobody knew what classes to place him in. He really refused – he even cut up my maths test with a craft knife. The school put him in remedial classes where he proceeded to act out and disrupt the class.

I spent the time to talk to him at lunch one day and found out that he was frustrated and upset and said all the teachers thought he was dumb. I took the time to explain what had happened and while we were talking I found out he was really into tabletop games, including Warcraft. I told him that I played Warcraft too and we bonded over this. He wanted to know more details about what factions I played in the games. I made a deal with him – if he took my maths test, I would talk to him about Warcraft.

You should have seen the looks on the other teachers’ faces when I showed them this boy’s maths test. From that point on, I was his champion. All it took was a conversation… and to tell him some of my Warcraft strategies.

Hello world! I have been teaching in New Zealand for 5 years now. I’m very excited to be starting my 6th year at a new job in Auckland as a Head of Mathematics Faculty. I have been a personal blogger for over 15 years now but I thought I would finally venture out into the professional blogging world.